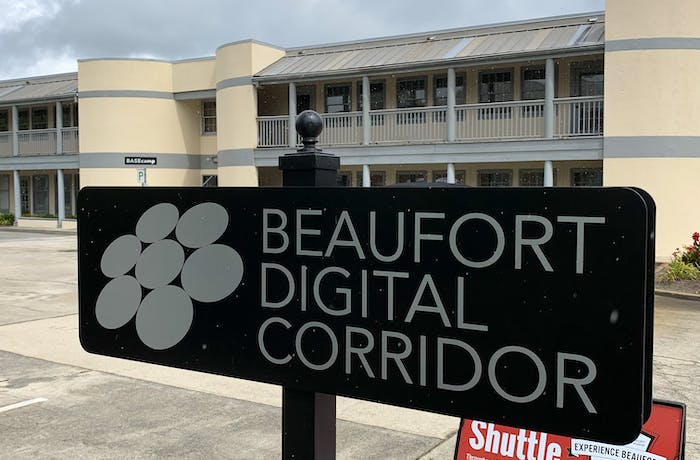 Assists with Scholarships and Ongoing Support

InterDev, an Atlanta-area provider of information technology, security and geographic information systems (GIS) services, has announced that it will sustain its commitment to the Beaufort, South Carolina-based Beaufort Digital Corridor(BDC) through 2019 based on the program's benefits for both the city and the community it serves.

The BDC sprung from a 2016 visit by Beaufort City Councilman Stephen Murray and City Manager William Prokop to an event sponsored by the Charleston Digital Corridor. Having landed its IT and security contract with the City of Beaufort the same year, InterDev was a natural mentor for the effort.

"We spent two days with a futurist, saying, 'What do we want Beaufort to be in 2030?'" says Prokop. "Items like the Digital Corridor are the foundation of what we have to grow to. We started a code camp, and InterDev steps right in and offers scholarships for people that cannot afford to pay for it."

CODEcamp, a Charleston Digital Corridor curriculum that Beaufort added in February 2018, is a project-based, introductory code education program designed for busy adults. Over the eight-session program, students learn the fundamentals of web development.

"InterDev was a founding member of the Digital Corridor and they remain active as a member and business sponsor," says BDC Program Manager Shelley Barratt. "They also sponsor other special programs, including Game On!, our game-coding education program to get kids interested in coding."

"InterDev's mission goes beyond helping governments and commercial interests reap the benefits of technology excellence," says InterDev Founder and CEO Gary Nichols. "We have always believed in giving back to the communities in which we work, and I cannot think of a better way than by sponsoring technology education initiatives."

In January 2017, the BDC also launched BASECamp, a "nascent technology" incubator that is currently at 80% occupancy. One of the tenants is MINDFLINT. "As a new business in the city, the Digital Corridor was perfect," says MINDFLINT Principal Nate Schaub. "It's a natural inroad to the community as a whole."

"With InterDev having a presence in Beaufort, everyone gets a little involved," says Barratt. "The InterDev IT employees come check on us –- and a couple of them came through the Beaufort educational system–the Technical College of the Lowcountry."

"The BDC has been a pivot point for Beaufort, and sponsors like InterDev have been a big contributor to that success," Barratt continues. "The computer science department at the University of South Carolina at Beaufort has been graduating 20+ grads per year. These students say, 'Hey I want to start something here.' We are helping to prevent brain drain."

About InterDev
Beyond their principal role as strategic provider of Managed IT and Security Services, InterDev is well known as a champion of IT visioning and innovation for growing businesses and government agencies; a role they perfected over nearly four decades. In addition to managing and hosting IT operations for a wide range of clients, InterDev offers location-based services – aerial (drone) mapping and MosaicGIS™, its Esri-based cloud GIS platform – as well as VoIP telecommunications services and circuit solutions. InterDev also devised a unique resource-sharing model, helping municipalities form IT alliances that drive greater value through partnership. InterDev delivers services to business and municipalities throughout the Southeast and Midwest from their offices in Atlanta, Beaufort (SC) and Chicago. For more information, visit http://www.interdev.com.