In a tide of stagnant economic growth, Beaufort is betting on the tech sector 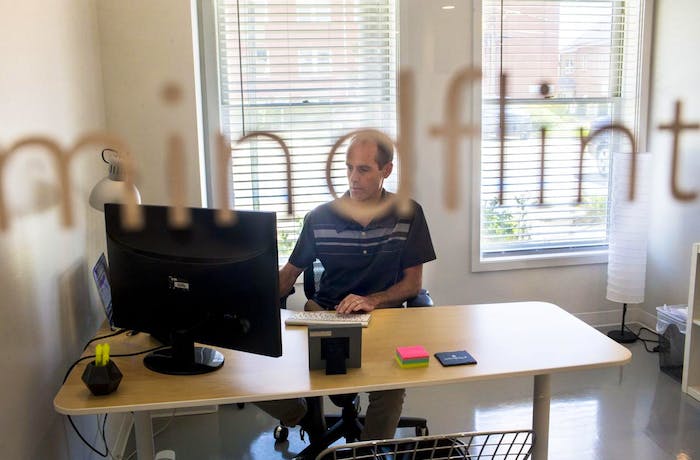 Nate Schaub, the founder of the marketing firm Mindflint, works in the Beaufort Digital Corridor office on Sept. 6. The city is betting that it can develop a tech sector to diversify its economy. Andrew J. Whitaker/Staff, The Post and Courier 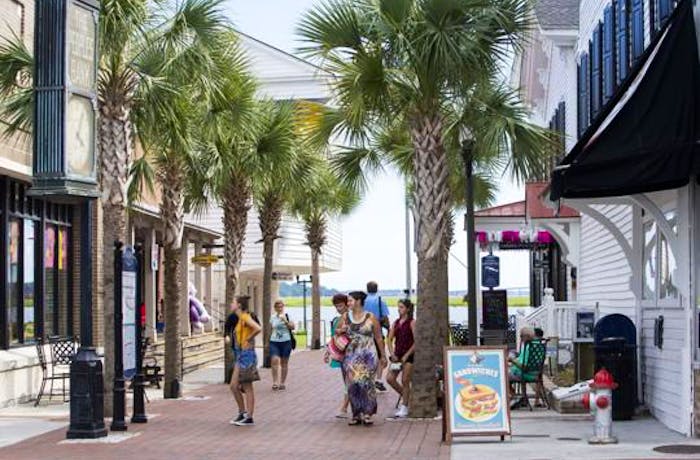 People walk through downtown Beaufort. City officials fear that it could become a retirement community that depends too heavily on service-sector jobs. Andrew J. Whitaker/Staff, The Post and Courier 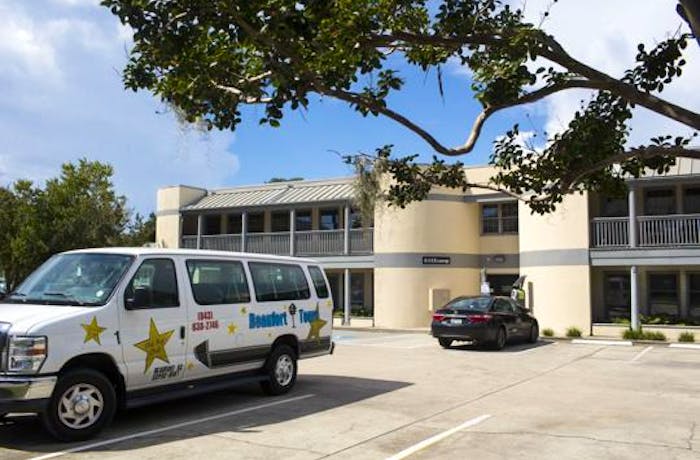 The Beaufort Digital Corridor’s office, BASECamp, was built in a converted bank branch owned by the city. Officials hope it could hedge against an economy dominated by tourism and retirees. Andrew J. Whitaker/Staff, The Post and Courier 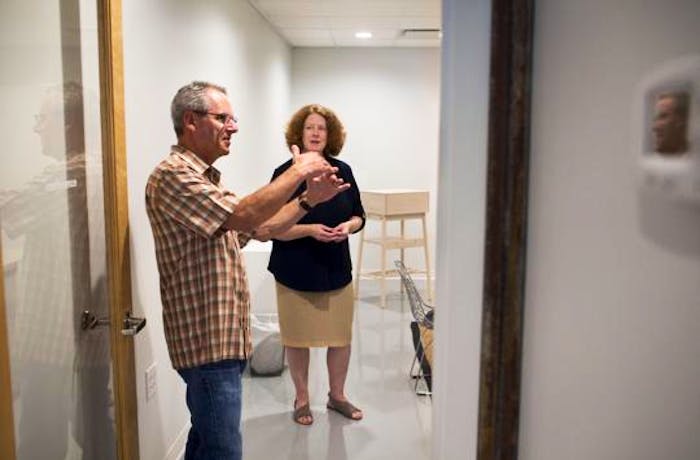 Beaufort Digital Corridor chairman Kevin Klingler and program manager Shelley Barratt describe the organization’s work in a conference room in a converted bank. The group hopes to piece together a big enough tech sector to keep some graduates at the University of South Carolina Beaufort from leaving town. Andrew J. Whitaker/Staff, The Post and Courier 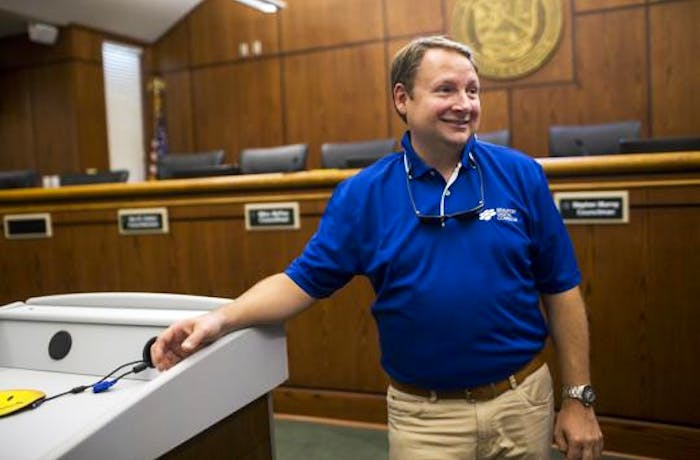 Stephen Murray III, a Beaufort city councilman, spearheaded the city’s tech initiative. He also sits on the Digital Corridor’s board of directors, which he says has taken a hands-on approach. Board members sometimes fill in at the office and consult on companies’ plans and finances. Andrew J. Whitaker/Staff, The Post and Courier

BEAUFORT – This city is facing an economic tide that's rippling across South Carolina's coast, a surge of inequality and soaring costs that favor wealthy newcomers over longtime residents.

Its leaders fear it could become a retirement community that sustains a big service sector with no economic counterweight. They think it might become a place where the real estate gets expensive and the pay stays low. So they decided they'd place a wager on a more lucrative economy.

They bought an abandoned bank branch downtown and made plans to fill it with tech startups, betting that they could piece together a new industry with a sleek renovation and the force of their will.

No matter that Beaufort is a city of 14,000 people. No matter that places many times larger have struggled mightily to win a slice of the tech sector. No matter that even South Carolina's most successful startup communities – in Charleston and Greenville – are small compared to places like Atlanta or Raleigh.

Beaufort's chances looked long, but the bet on what's now called the Beaufort Digital Corridor hasn't fizzled. It took the better part of two years to fill half the 10 offices they put in the bank building, but Beaufort's new technology boosters say they're turning a corner against the odds.

'The jobs that we need'

Their success so far isn't much to look at, just a few people sitting at their computers in glass-walled offices and shared cubicles.

One moved his company here from Pittsburgh. Another works for a startup headquartered in Charleston but wanted to live in Beaufort, his hometown. Another was toying with the idea of a digital media business out West, but fell for the Lowcountry on vacation.

City officials say they're happy with the way things are going: Beaufort isn't spinning off startups, but it would be just as well if the city became an outpost for tech workers looking to shed long commutes and the city grind for somewhere quieter.

Beaufort, after all, isn't trying to be a big tech hub. It'll never compete with Atlanta or Raleigh, or even Charleston. But it desperately wants new opportunities – to be a viable option for business owners to move in and local children to stay.

The challenges of South Carolina's fast-growing coast are distilled in Beaufort, where the hospitality business accounts for a quarter of all private-sector jobs and income growth has been sluggish since the recession. Beaufort County is one of the state's oldest – a quarter of its residents are retirement age – and local officials worry an aging population will steer the area toward low-paid jobs.

All the while, young people course through a Marines air station up the road and a University of South Carolina campus that has expanded over the past few years. Most veterans and graduates leave.

"We were becoming a retirement city and one that had tourists that loved to see our architecture and our waterfront, our parks," said Beaufort city manager Bill Prokop. "If we stayed on that, we wouldn't be creating the jobs that we need."

So it set out to find them.

The city eventually looked up the road to Charleston, which has slowly built up the makings of a tech sector.

Charleston boasts a couple hundred startups now. A handful of them have managed to hire dozens of employees, but most of them are small – lots of little bets on the future of the region's economy.

Joe Floyd runs one of them. His company, InsureSign, has hired about a dozen people to make and sell software that handles electronic signatures. He started the company in Charleston, since he figured that's where he could find the workers he needed.

But he wonders if they wouldn't eventually be open to moving to his adopted home: Beaufort, where he has lived for the past 18 years.

After all, the idea of a tech industry in Charleston was long seen as an outside bet, and it wasn't so different from Beaufort when its tech push started in the early 2000s: a city with a lot of eggs in just a few baskets, dependent on service jobs and the government.

Like Beaufort, the city of Charleston pushed the idea of a tech industry at first. It formed the Charleston Digital Corridor in 2001, opened a pair of offices for startups and started offering whatever features they wanted –  coding classes or networking events or job boards.

Ernest Andrade, the Charleston initiative's director, said his group gave their plans to Beaufort's leaders on the cheap because the city was eager to test its model. The Beaufort project is partly an experiment to see if his model can work again, this time in a smaller city that won't have as many advantages. Charleston, for instance, has a pair of large publicly traded software companies and a Navy installation with a tech focus.

It was up to Beaufort to find a building for its technology project and the money to fix it up. The city contributed the former bank, which it already owned, and it pulled together $250,000 in private grants and state economic-development money.

The city still pays $50,000 a year to run the project. Officials hope it will pay for itself within a few years, but they haven't set a timeline for cutting it loose.

When they do, they figure their city won't be on a path to mimicking Charleston's tech industry. But then, they'd be happy with something much smaller.

Getting Beaufort's tech industry to grow even this big – to a handful of startups and remote workers – has taken an all-hands effort.

It's a lesson to other cities and towns that have eyed a piece of the tech industry, places like Columbia, Hartsville and Myrtle Beach:

This isn't like other business-development projects. Setting up a project and letting it run won't go far.

For one thing, Beaufort has the benefit of residents who have experience in the tech sector – people who came to town because they liked the coast. Look at Kevin Klingler, who now chairs the Beaufort Digital Corridor. He moved to Beaufort after selling a startup he founded in California, thinking it would be a nice place to retire.

For another, it managed to find a group of advisers who were willing to get deep in the weeds of running the organization. Klingler, for instance, has started his retirement by advising startups that come through Beaufort one-on-one, getting into their business models and their financing needs. He leaves business cards with his cell phone number in the office.

Stephen Murray III, a city councilman who spearheaded the tech project, also sits on the board. He's there to keep the city in the loop, but he says he sometimes fills in at its office if program manager Shelley Barratt can't be there. And when the group recruited a few College of Charleston students to work in Beaufort for the summer, he put them up at his house.

But then, Murray said, he's not sure what else Beaufort ought to do, with young people leaving, incomes rising slowly and housing costs ticking up.

He was sitting in a City Hall conference room with a strategic plan taped up on the wall, laying out a list of goals for the city. Like using Beaufort's tourist charm to lure businesses instead of visitors alone. Or diversifying the local economy. Or drawing up new paths into the middle class.

It may as well have said that Beaufort's economy needs to turn a corner, away from a model it has leaned on for decades.

"If you don't try something, you're never going to know," said Prokop, the city manager. "You could wishful think, but here we said we'll put our money where our mouth is and see what happens." And even still, they don't know what will happen, if their bet on tech will be enough turn back a tide of economic trouble.