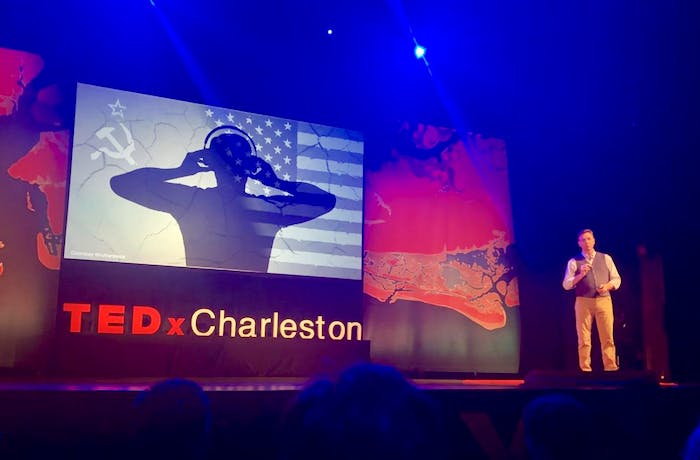 At a recent TEDx presentation, J. Keith McElveen asked audience members to close one of their eyes. He then asked them to try to connect the tips of their index fingers.

He said most people would have trouble making the connection since they would lack depth perception with using only one eye. Humans see the world in 3D, he explained, and blocking one eye impacts that.

"Your hearing system works the same way," said the owner of Wave Sciences, a Charleston based audio company that enables what they call 3D hearing through technology.

"If you lose hearing in one ear or both, it screws up this depth perception that your hearing system uses."

Recently, McElveen and his team announced they are designing an advanced T-shirt that will help people who lack this natural depth perception in hearing.

The hope is it will take things like hearing aids to the next level.

"I would personally like to see this get into the hands of children," he said.

The Center for Disease Control and Prevention reports that nearly 15 percent of children deal with hearing loss. For adults, the National Institute of Health highlights that nearly 30 million could benefit from a hearing aid.

Though the devices are incredibly helpful, they mainly amplify sound. They also often lack the capability of returning someone's natural hearing depth perception.

That natural process, often referred to as the "cocktail party effect," centers on a human's ability to hold a conversation. The effect helps distinguish one person in the middle of a loud crowd.

The T-shirt device would give people that ability through a series of strategically placed microphones in the shirt. The microphones would be based on the direction the user is facing. That way they can focus on a specific sound. It also would be an evolution of the technology the company has been selling to governments and the military for years.

McElveen's relationship with audio work starts with the Cold War. During that period he worked in audio forensics examining evidence.

In trying to correct the poor audio quality, that's when he said he really got hooked on the practice.

From there, he ended up working 25 years in the field. Eventually, he got inspired by the giant glass dishes or parabolic microphones used at televised football games.

"That thing can hear the quarterback in the middle of a football stadium that's just slammed with tens of thousands of people all screaming their heads off," he said.

From there, McElveen said, he and his team started developing similar technology with greater strength. They used physics and mathematics to place microphones in a lighter and more compact version of the parabolic microphone.

This interested the military since they could use the device for things like search-and-rescue missions, he said. It could pick up sound from 100 yards away.

But using the equipment required actually holding the dish. So they asked if McElveen and his team could make something that was hands-free.

"Because they got tired of holding them," he said.

This led to the creation of their vest-hearing technology. McElveen explained that they took the same concept with the dish and applied it to a vest. By interweaving microphones into a vest, they could collect audio and relay it to headphones.

This new technology also introduced another consumer. They found that on the West Coast, the government used it for suicide prevention. When people attempt to jump off a bridge, psychologists use megaphones to communicate with them.

But they have difficulty in hearing what the person is saying back to them. The vest-hearing technology became a less invasive way for them to do that.

It was when McElveen's chief scientist, Dr. Noah Schiffman, used the vest device for himself that the larger impact was noticed. Schiffman was born deaf in his right ear and has only 80 percent hearing in his left ear.

For him, it's impossible to hold conversations in loud crowds. Even with a hearing aid, it's a challenge since the device picks up everything. He compared it to a conference call.

If everyone tries to talk at the same time during a conference call, it's impossible to distinguish one voice. When he and McElveen tested the vest device while sitting at a table at Charleston's Blind Tiger Pub on a Friday night, Schiffman was astounded.

"It was this incredible and emotional experience for me," he said. "It was really noisy, yet we communicated."

What helps the equipment have a leg up in comparison to hearing aids is the number of microphones McElveen said. Since they are able to place more microphones in a vest versus a hearing aid, they can do more with sound.

They don't need federal approval since they are simply collecting sounds like a recorder.

The company also has options to adjust the direction of the microphones via a phone. So if the user wants to hear what the person directly next to them is saying, they can do that.

"And it makes sense, as well, because generally the person that you want to hear is the person you're facing in a conversation," said Karen Lucas, Wave Sciences' head of administration.

Unfortunately for the average individual with hearing loss, the equipment may be too expensive. A product like the vest device can cost as much as $10,000.

They are hoping it will be more affordable with the T-shirt product.

"We would definitely like to get this to a point where it is commercially available," Schiffman said.

Right now, McElveen and his team are still mapping out the concept design for the shirt. They want to have something that is thin and can be machine washed. And the team definitely believes the shirt is a possibility.

Previous equipment like the vest was made to military standards. They explained that no one using the T-shirt casually would need to hear something hundreds of miles away.

"It doesn't need to be as powerful," Lucas said. "So the amount of microphones is reduced as well."

Growing up, Schiffman explained that he didn't enjoy wearing a hearing aid. He said it felt like it made him stand out. With the shirt, and even the vest, it's not as noticeable since it connects to headphones.