Sit on these painted benches, and learn more about Beaufort 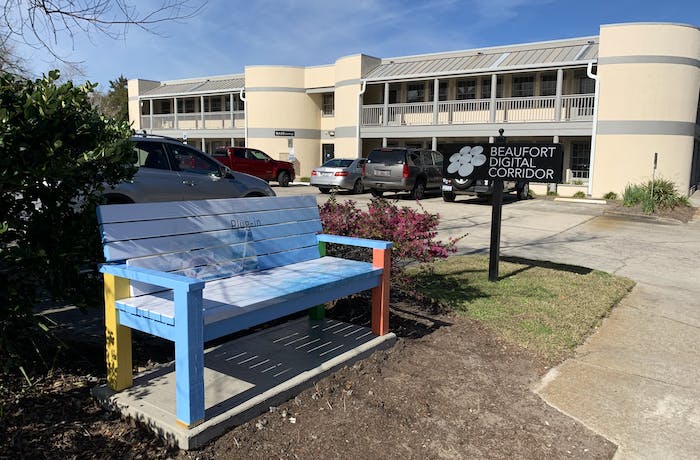 Residents and visitors to the City of Beaufort may notice new painted benches dotted around downtown, offering a respite for people who want to sit for a few moments.

The benches were placed last week in six locations throughout downtown, and will be viewed by members of the South Carolina Arts Commission, who are visiting Beaufort on Jan. 23 and will meet with the artists who painted the benches. The Arts Commission will be in town to hold a workshop for the public as part of its Canvass of the People 2020 tour, and has added the bench tour to its visit.

The bench project, which is under the auspices of the Beaufort Cultural Arts District Board (CDAB), began about a year-and-a-half-ago. Robb Wells, President and CEO of the Greater Beaufort & Port Royal Convention & Visitors Bureau and at the time a member of the CDAB, said that visitors to Beaufort indicated in surveys that the City did not offer enough seating downtown to allow them to sit and "take it all in."

"The CDAB wanted to create a solution that would foster collaboration, offers local artists visibility, and provide the seating that people said they wanted," said Rhonda Carey, a member of the CDAB and downtown events coordinator for the City.

The collaboration began with LowCountry Habitat for Humanity, whose carpenters built each 4-foot long bench. "This served as the 'canvas' for each artist," Carey said.

Six partner organizations were asked to work with their artists to create a design that would reflect their organization's mission, identity, and place in the community, Carey said. Various materials were used, including oil paint, acrylic, spray paint, and digital artwork. The project was funded by the CDAB and each of the participating organizations.

"It took me about three weeks to paint the bench," he said. "I enjoyed every minute of it. It's such a blessing to be part of something so great and historic, and to capture the spirit of the Low Country."

Linda Silk Sviland painted Habitat's bench, using the organization's blue and green colors to show a blueprint of a home and the actual finished home. The words "these are my plans for Saturday" are painted over the blueprint – a tagline that Habitat sometimes uses.

"I think it's a wonderful way to make art," she said. "Other cities have done beautiful sculptures, but there is no function other than beauty. This is functional art – it's a terrific way to have the public see art that is useful."

Where you can find each bench: