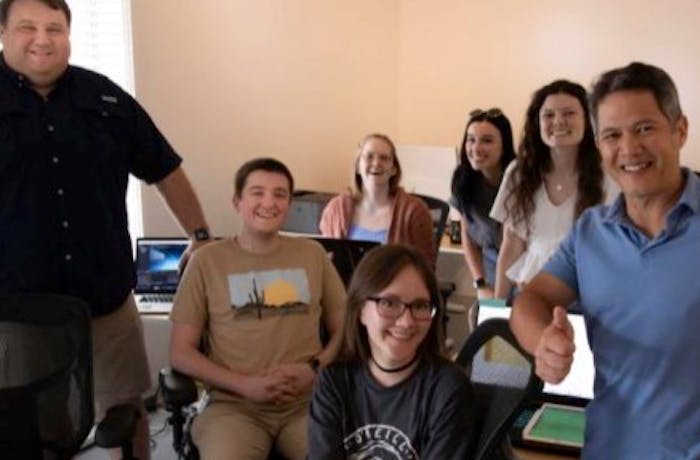 Old or young, male or female, left, right, or center, video gaming is a common language that unites so many of us. From arcades to Atari, PCs to Playstations, you're almost guaranteed to find your niche in the wide world of gaming. That's why the Beaufort Digital Corridor (BDC) was excited to celebrate National Video Games Day this year, observed annually on September 12. In fact, it's like Video Games Day all year long at the BDC – especially if your console of choice is a cell phone.

Thanks to the 2022 Relentless Challenge Grant, a state-wide competitive grant program hosted by the SC Commerce Office of Innovation, local adults 18-and-older are able to take part in a mobile gaming accelerator program offered exclusively by the Beaufort Digital Corridor. The initial cohort of six students and three additional collaborators have been hard at work all year on not just playing, but designing their very own mobile games from the ground up, with the support of the program and its mentors.

Jason Loia, CEO of Dolfin Ventures, a BDC member organization, is the primary instructor and author of the unique, 8-week curriculum that guides pupils through the process of planning, building, and publishing their games to the App Store. Operational at the Beaufort Digital Corridor since October 2021, Dolfin Ventures was founded on the basis that developing mobile games is more efficient and cost-effective for budding entrepreneurs than traditional PC or console games, which can take massive investments of time and manpower to produce. Identifiable by the giant game-controller piñata in their office, Loia and his co-founder, Andrew Branning, are pleased to lend their expertise to the next generation of successful mobile gaming professionals.

While all are welcome, this program was established with the express intention of generating high-paying potential jobs for area women who may or may not have an extensive tech background. Though the majority of mobile game consumers are female, creators remain overwhelmingly male, and the BDC hopes to bridge that divide with the program. To that end, a number of fully-funded scholarships have been set aside specifically for female participants.

A panel of judges, including representatives from Dolfin Ventures, the University of South Carolina Beaufort's Computational Science Department, Metaverse Gaming, McAfee, Zodiac Entertainment, and Gaia Online selected only the very best game ideas from a pool of entrepreneur applicants. The chosen were then "put through a very specific methodology," recalled Loia – featuring instruction on how to pitch concepts, draft a game production plan, strategize monetization, and lock in a 'first-playable' design. "We don't need to reinvent the wheel," said Loia, explaining that there exists a tried-and-true formula for taking a game from an idea stage, to blueprint, to market. According to Branning, "The big picture is to give community members a fast track to seeing what the industry is like."

This so-called "mini studio experience" is also intended to facilitate collaboration between artists and technologists, with no fewer than seven interns on board to contribute concept art and 3-D design. Even faculty from the University of South Carolina Beaufort have been brought on to consult and help with the game-building process, namely Brian Canada, Ph.D. and Professor Jim Sidletsky.

Though the first cohort officially concluded in June of this year, participants are still actively refining their games and pitches ahead of an October 20 open-house game pitch event, "DEMO DAY," which is free and open to the public. Applications are now open for the second cohort, if you'd like to celebrate next year's National Video Games Day by inventing one of your very own.