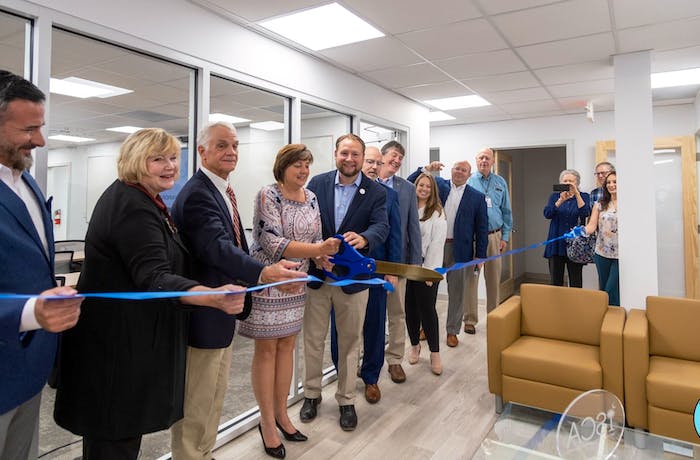 BEAUFORT, S.C. (Oct. 6, 2022) – "What you are doing here is extremely important," U.S. Rep. Nancy Mace said on Oct. 5 at the dedication of the Southern Carolina Landing Pad in Beaufort.

Congresswoman Mace was referring to the partnerships that have led to yet another economic development milestone for the City of Beaufort and the region.

The Landing Pad, on the second floor of the City of Beaufort-owned building at 500 Carteret St., allows companies from out-of-state or overseas to explore business opportunities in the region. It was created to help "lower barriers to entry," said John O'Toole, executive director of the Beaufort County Economic Development Corporation. The BCEDC is one of the partners behind the Landing Pad, along with the City of Beaufort, Beaufort County, the Southern Carolina Alliance, the South Carolina Department of Commerce, and Hargray.

The City has been involved in multiple economic development efforts to expand its job base. Those include the Beaufort Digital Corridor and the South Coast Cyber Center, which is working to develop cybersecurity careers with Technical College of the Lowcountry and the University of South Carolina Beaufort. Both Congresswoman Mace, and State Rep. Shannon Erickson, also at the dedication, have helped to secure significant grants for that South Coast Cyber Center.

At the ceremony, Jose Vargas, regional manager of sales for Hargray, presented a check for $30,000 for the Landing Pad to Mayor Stephen Murray.

Rep. Erickson said the area's southern hospitality was a selling point as economic development initiatives are pursued. State Sen. Chip Campsen, also at the event, said it was important to preserve the area's beauty and resources even as the region grows.

The Landing Pad comprises 3,300 square feet, and includes a large training room, small conference room, 7 individual offices, kitchen, and high-speed internet. Among other things, it will be used for classes offered by the Beaufort Digital Corridor, also at 500 Carteret.

A Japanese company, SkyDrive Inc., a developer of vertical takeoff flying vehicles, is a current tenant at the Landing Pad.