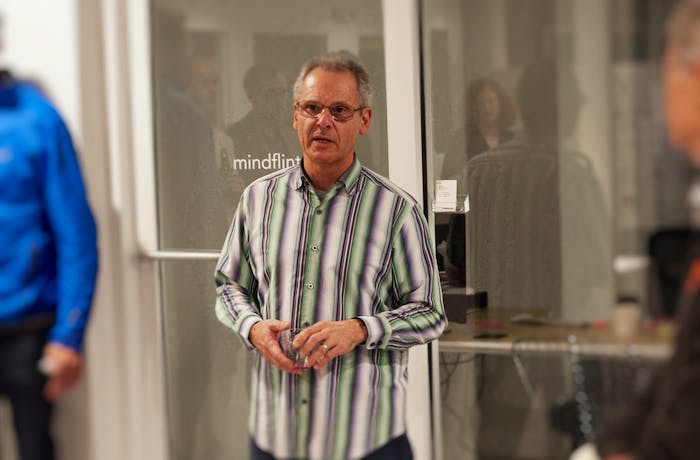 Kevin Klingler is Chairman of the Board for the Beaufort Digital Corridor (BDC). He and his wife moved to Beaufort five years ago after living in L.A. for several decades. After having sold his last company, Kevin decided it was time to give back. He mentors residents at BASEcamp as well as students - this week's talk at USCB, "The Elements of a Technology Startup" will be followed by the second in the series, "Critical Success Factors for Building a Successful Business or Life" the following week at BASEcamp.

Where did you grow up and what was life like?

I grew up on the west side of Cleveland, and in retrospect I know I had a really good childhood. I had great parents.

How did you come to be in Beaufort?

California had restrictive laws against businesses, so I relocated my company in 2014. What really pushed me out was the 2013 law that significantly restricted my capacity to differentiate between 1099 and W-2 employees, which complicated my business strategy. In the last ten years, thirteen-thousand companies have left CA.

I recognized South Carolina as a business-friendly state. Also, I did not want to move back to the cold after living in CA. My wife and I are avid skiers, but we want to visit skiing and not live with it. We had some friends and acquaintances who recommended Savannah and Charleston- places in this area, and we wound up here.

What was your first job? What did you learn from it?

My first job was working for my father's construction and development company. I started at the bottom: as a bricklayer's apprentice. I did not have any ticket to the executive suite. It was a tiny company- his office was next door to my mom's office where she did the books.

I certainly learned work ethic. I also learned to hire what you don't know and don't do well. A lot of people try to do too much themselves, do it poorly, and regret it later. Do it well or hire somebody else to do it.

Did you have an entrepreneurial drive early on, or did you acquire it through experiences?

By the time I was fifteen I knew I was going to be a studio guitar player. That's why I moved out to L.A., where I did wind up doing studio session work and playing for tv shows.

In your own words, what did the company you sold do?

SmartSound does technologies that allow media creators, video editors, and small filmmakers to make custom music soundtracks for their videos- faster and easier than any other method. You can still hire composers to do that and that's a really good path, but if you can't quite afford that this is a really great solution.

What drew you to that business, or inspired you to start it?

After doing studio work, I started doing some licensing and wound up becoming a music supervisor for tv shows because I knew a lot about music. That was my first company that I started with some partners, that had some moderate success. I transitioned from that into being a film and tv composer where I learned the process of fitting music to visual images- that was the real impetus where I saw an opportunity, a market gap.

What is your company now and are you still involved?

SmartSound has now merged into a larger company, and they added it into their portfolio of businesses. It is one of Europe's larger, if not largest, independent music companies. They are aware that they need to get into technology more- that music by itself is getting less value unless it is attached to technology, and that's what we specialized in. I still give occasional recommendations to the new company and remain on their mailing list.

How would you describe the organization's culture under your ownership?

I tried to have a family-type supportive culture, though I stopped short of being friends with any employees. You need distance to be able to manage effectively. I tried to have a very casual, relaxed environment while making it clear to everybody that they had to perform. I made a conscious choice to not be friends in order to make sure we had sufficient discipline.

What was your management style? Did it change over time?

When I started SmartSound I was still too nice with people; not that you have to be the opposite, but I let too much go. I learned to be more on-task as time went on, more direct.

What lessons have you learned from bad bosses?

What's the hardest or most important lesson you've learned in business?

Empower but verify. Don't trust people too much- and I don't mean in terms of honesty and integrity- that's fundamental- you can spot that a mile away when you're working with somebody that doesn't have it. What I mean is don't empower them so much that you don't know what they're doing with your business. You need to know what results they're getting and why, and if they're not getting the results you need for success to bring them to task on that. I tended to be too accommodating early in my career, too hands-off- that's a mistake.

What's the biggest misconception about being an entrepreneur?

That it's easier than working for somebody else.

What obstacles have you faced building your business? How have you overcome them?

What would you look for in the people you hired?

Self-starting. Hire people that can always see the dirt: years ago, I was looking for a housekeeper and my friend raved about theirs, so I hired her. She worked for me for a few years, and then I found out they had fired her. I asked, "Why did you fire her?" And my friend said, "She stopped seeing the dirt." That stuck with me. You have to always see the dirt. You have to see the stuff that needs to be taken care of.

What one person has been the biggest influence on your business life? Why?

Unequivocally it's my father, who died early and tragically in a car accident. I started my first company two years before that, and I was calling him twice a week to get advice. That changed my life, and it turned out to change my life for the positive.

Effectiveness. Getting things done. Helping people improve their lives. I was very fortunate. As I was starting SmartSound I didn't have my father, but I had other people that helped me and that's really what my role here at the BDC is about. They did that for me twenty-five years ago and I'm now their age that they were then and it's time to keep that wheel turning.

Are you a Mac or a PC? iPhone or Android?

What's a book you always recommend?

One of the best things that influenced my career of how I execute on business was Steven Covey's Seven Habits of Highly Effective People. I didn't just read that book, I lived it- I read it multiple times, got the tape and listened to it in my car in L.A. traffic. It's really about how to make your life more effective.

The other book that was really interesting and changed my life was, Learned Optimism: How to Change Your Mind and Your Life by Dr. Martin Seligman, the first researcher to posit that whatever habits you have, you can change. The most satisfied, happy, and effective people were always positive people, and if you weren't positive you could learn that and change the way you are. A lot of people naturally have that, but the fact that you could learn something like that can change your life. Here's the key though: you can learn anything that way- not just optimism. You can apply it to anything- any weakness you have as a person.

Outside of your volunteer work what keeps you busy?

I have hobbies- I cook a lot and have received high regard for my cooking. We're going to be one of the host houses for the Beaufort Memorial Hospital Valentine Ball where we will host a small group of four to six. I do better with small groups because I cook really high-end. And, I'm getting back into playing more guitar now, something forsaken for a long time.